Our website uses cookies so that we can provide a better service. Continue to use the site as normal if you're happy with this, or find out how to manage cookies.
X
You are here
> Events
> Great River Race 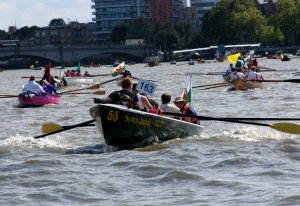 Described by many as "London's other Marathon", the Great River Race is London's most colourful and spectacular river event. Each year contestants compete in a 22 mile race between Millwall and Richmond to find the UK Traditional Boat Champions. Up to 300 traditional boats, from wherries to war canoes, and from Cornish gigs to watermen's cutters, take part.

"The idea of The Great River Race is to find the UK Traditional Boat Champions. The overall winners receive the Challenge Trophy of The Company of Watermen & Lightermen of the River Thames. This is a mounted Waterman's Badge, first issued to William Savage of Gravesend in 1803.

The race is open to any traditional-style boat powered by a minimum of four oars or paddles. Sliding seats and riggers are not permitted. Each boat must have a cox and, in keeping with the Watermen's ancient traditional role as the taxi drivers for the Thames, each boat must carry a passenger.

The optimum speed of all craft competing is calculated by computer and no account is taken of the potential abilities of the crews. Boats leave the start line on a pursuit handicap basis - the slowest first - and the handicap system is calculated so that all boats should cross the finish line at the same time if all crews put in identical performances. Thus it is the crew that extracts the most out of its boat, regardless of type, which emerges as winner. The same principle applies to all handicap classes."

For more information about the Great River Race visit the website  (opens in a new window).

Watch our film: The Great River Race - A Closer Look! and join the PLA’s crew onboard Centurion for the Great Rive Race.  This is a two-minute express row from Millwall slip upriver, past Canary Wharf, under Tower Bridge, past the London Eye and on towards race finish at Ham.