Our website uses cookies so that we can provide a better service. Continue to use the site as normal if you're happy with this, or find out how to manage cookies.
X
You are here
>Thames Barge Sailing Race returns

People of the Thames 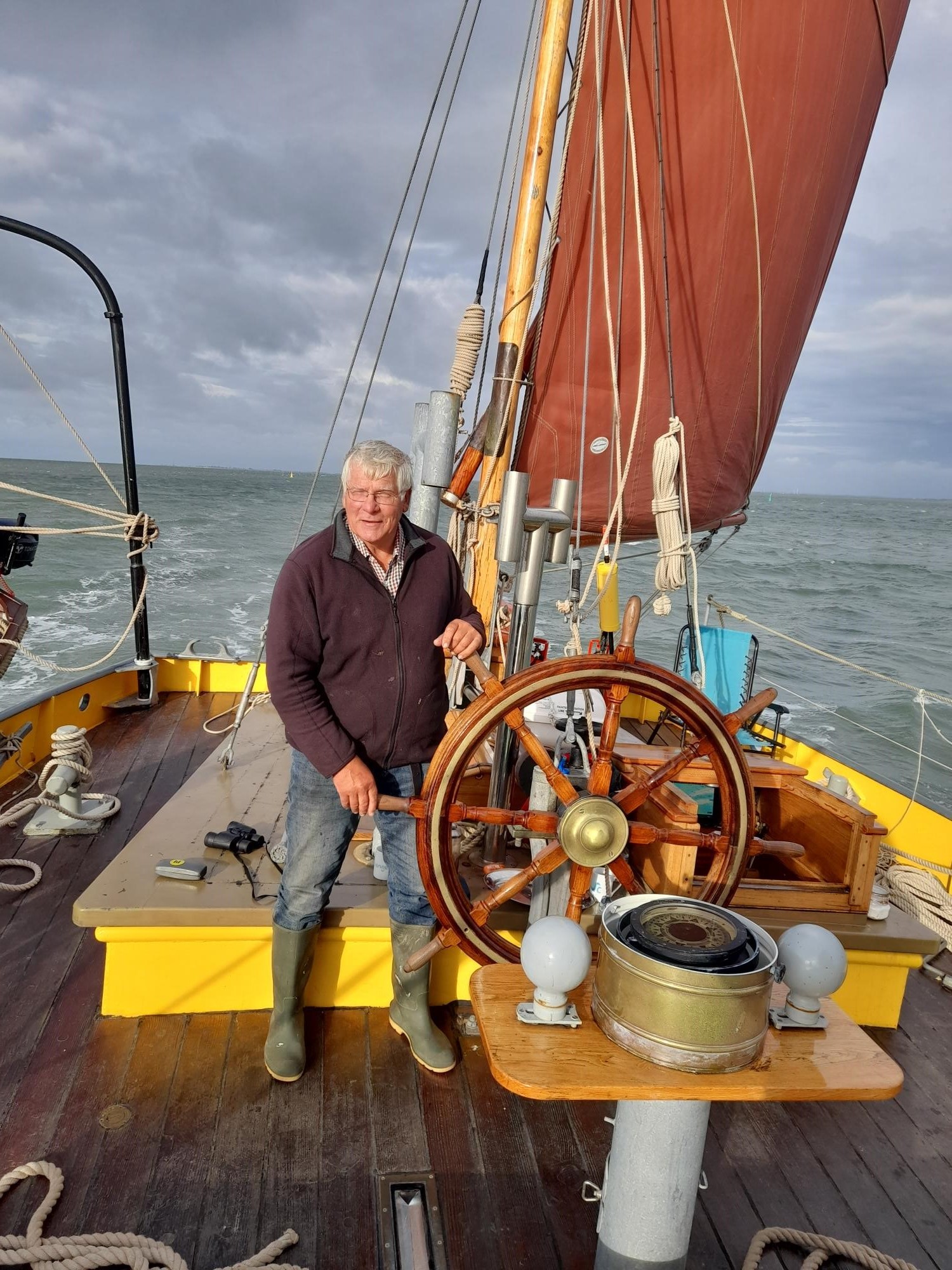 Cancelled by the pandemic in 2020, the historic Thames Barge Sailing Race breezes back into Gravesend on 14 August. Skipper of entrant Blue Mermaid, and co-founder of the Sea-Change Sailing Trust, Richard Titchener, from Maldon, Essex, casts light on his life on the estuary.

“I grew up in Brightlingsea, rushing for the school bus to the tune of the shipyard whistle, or ships blowing horns to call a pilot.

“I started sailing at the age of eight in eight-foot pram dinghies on the boating lake with cotton lugsails.

“I graduated to tidal water with Brightlingsea Sailing Club whilst at junior school.

“I have always been fascinated by the simplicity of working boats.

“Even at an early age, I liked it that you could walk wide decks, or make a cup of tea on board.

“Denied the opportunity of trainspotting by Dr Beeching removing our railway, I instead donned anorak and watched the comings and goings of the early charter barges, most of them then sailed without engines, crewed by ex-trading bargemen.

“I remember being let loose with a group of friends in an engine-less sailing smack, armed with a hand pump, oil lights, a couple of anchors, rowboat and a lead line.

“It all seemed perfectly normal, because it was.

“The adults were usually just out of sight. We felt like kings of the world, getting into enough scrapes to learn a lot, but not enough to come to a sticky end.”

“There was a healthy fishing fleet back then.

“By the seventies, enthusiasts were taking the engines out of motor smacks and returning them to sail as yachts, advised by retired fishermen, wearing jerseys with names like Britannia, White Heather or Westward.

“We thought these yachts were consigned to history, but many are now restored and in the Mediterranean.”

“In 1972, an oyster smack race from Gravesend to Cherry Garden Pier took me to the capital, ending with a reception at the Old Billingsgate, reached via a vertiginous ladder, in pouring rain.

“A few years later, a gap year gave me the chance to work on a motor barge in the last years of the docks, with ships discharged into lighters and barges alongside.

“Standing on the forecastle head of a ship in the Royal Albert Dock and looking west, you felt you could reach out and touch St Paul’s Cathedral.

“It was a privilege to witness a way of life that had been unchanged for generations, although during that year there was a strike about containerization. It was obvious where things were heading."

“So off I went to get a degree in something I enjoyed and a began a career in what is now called HR; back then we called it Personnel Management.

“My timing was not brilliant, joining British Steel, just as Margaret Thatcher got into gear; but what an experience!

“If you get a chance to visit a cast house floor when a blast furnace is tapping, do so, while you still can.

“After fifteen years and when GEC Marconi closed the factory I worked at in Chelmsford, I was fortunate to turn sailing from a hobby into a career and became a barge mate, working with young people.

“That is now twenty-seven years ago.”

“We set up the Sea-Change Sailing Trust in 2007, to allow us to keep working with young people on Thames barges.

“Why? Because they are fantastic.

“If you divide the amount of fun to be had by the number needed to have it, you cannot beat a sailing barge.

“Two people can sail a ninety-foot vessel carrying 150 tons of cargo, or a group of trainees can sail intensively and learn seamanship hands on.  They see immediately what they get out for what they put in.

“In sail-training, learning skills and working together is a vehicle for people to learn about themselves:

“For us, it is also important to be in harmony with nature, with wind and tide.

“We work with people from age seven, to those living with dementia.

“A typical day might involve: an early start to catch the tide, young people working the anchor windlass, with breakfast underway, anchoring in a sheltered creek for seal spotting, then an evening teaching rowing, or how to sail one of our toppers to the beach. “

“After several years hiring, the trust was able to build our own barge, Blue Mermaid, a replica of one of the last Thames barges built in 1930.

“When we started the project, with the help of many, including the PLA, we were ahead of the sail-cargo curve.

“Now it has caught us up.

“Excitingly, current thinking commits to carbon targets ahead of the technology to achieve them, but an engine-less sailing barge already operates with low emissions, and we offset the little we do produce.

“Blue Mermaid is built to cargo rules, and we are working with the Maritime & Coastguard Agency to enable her to carry it soon.

“Our Blue Mermaid was commissioned in May 2019.

“We had been looking forward to a bumper first full season, when COVID-19 intervened.

“Fortunately, with the help of furlough emergency funding and all our supporters, the charity has survived.

“I am very grateful to everyone who has helped us make it through.”

“It is good to see the matches restarting again. We are all looking forward to Saturday.

“Established by Henry Dodd, who made his fortune moving London's rubbish by sailing barge,

the Thames Match ranks second only to the America's Cup, as the oldest sailing event in the world.

“We first took part in a barge called Xylonite.

“Over the years we have been regularly joined by PLA friends.

“This year there should be nine barges taking part.

“It will be so good to get out on the water, enjoy the river and catch up with friends after the long months of lockdown.”

Favourite place on the Thames? Anchoring in the Lower Hope, near where Joseph Conrad lived at Stanford Le Hope and where his narrator Marlow started several of his tales.

Best Thames-side restaurant or pub? The Town of Ramsgate in Wapping.

Find out more about Richard's work with the Sea Change Sailing Trust: https://www.seachangesailingtrust.org.uk/.

People of the Thames Telling the stories of the river.