Our website uses cookies so that we can provide a better service. Continue to use the site as normal if you're happy with this, or find out how to manage cookies.
X
You are here
> Environment
> Grazing Marsh - Allhallows Marshes 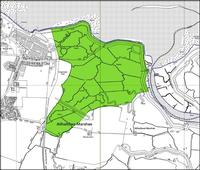 Allhallows Marshes cover 98 hectares of land consisting of grazing marsh with water courses and ditches.  It is more evenly grazed with open conditions dominating over the whole of the area. It is distinctly brackish over most of its area and has a greater tendency to dry out in the summer.  As a consequence, its botanical significance is different to that at Cliffe.

Click on image to view figure of Allhallows Marshes.

Salt tolerant species such as sea milkwort, saltmarsh rush and sea club-rush are abundant.  Because of the tendency for ditches to dry out, it has species characteristic of the water’s edge rather than true aquatics, including rare species namely saltmarsh goosefoot and annual beard grass.

The botanical interest of the grassland includes spiny restharrow and is a good indicator of agriculturally unimproved grassland.

The last condition assessment of the land (2009) by Natural England confirmed that the holding is in a favourable condition for breeding and overwintering bird habitat.

The northern part of the site is permanent pasture under the Natural England Higher Level Stewardship (HLS).  The land is currently grazed by cattle and horses.  The remainder of the site lying to the south of the main drain is grazed, mainly by horses.