Our website uses cookies so that we can provide a better service. Continue to use the site as normal if you're happy with this, or find out how to manage cookies.
X
You are here
>Thames Barrier Navigation Centre 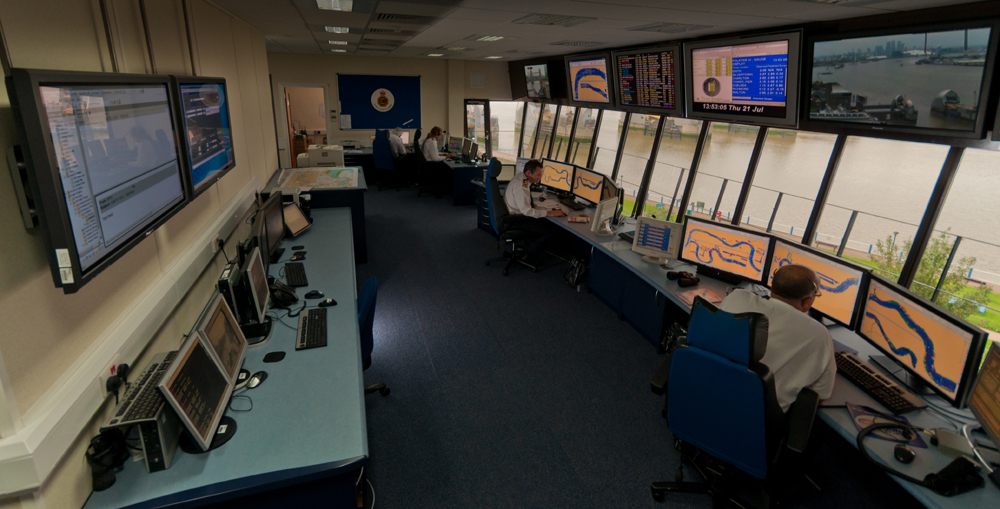 The iconic span of the Thames Barrier has been keeping London protected from flooding since it became operational in 1982 after an eight-year construction programme that began in 1974.

The Port of London Authority’s Thames Barrier Navigation Centre (TBNC) co-ordinates the safe navigation of 33,000 vessel movements through the Thames Barrier every year.  It does this 24 hours a day, 365 days a year using aids including radar, Thames AIS, electronic charts, VHF radio and CCTV.

The People
TBNC is staffed by the officers who work at Vessel Traffic Services (VTS), think ‘air traffic control for ships’, who have the responsibility of:

Working in Partnership
Partnerships make for joined-up and co-ordinated effort to ensure safety of life and navigation. The Maritime and Coastguard Agency (MCA) work in the TBNC control room so that operators can talk directly to one another if a situation occurs. TBNC works with the Environment Agency to control vessel during movement the continuous maintenance programme where spans of the Thames Barrier are closed.

Massive ships that have navigated through the Thames Barrier include the Royal Navy aircraft carriers HMS Ocean for the London 2012 Olympics and HMS Illustrious in 2013 for the 70th anniversary of the Battle of the Atlantic.

History
Today’s Thames Barrier Navigation Centre (TBNC) has its roots in the Thames Navigation Service (TNS) which was established in 1959.  The technologies of the period were short-wave radio and the emergence of radar with patchy coverage.  At first, radar only covered Gravesend Reach and gradually extended out to over 50 miles of the Thames between 1959 and 1965. By the 1980s the reach of the PLA’s radars was from Greenwich to Southend.

TBNC is complemented by PLA’s Port Control Centre (PCC) located next to the Gravesend main office which started build in 1991 and was completed in 1992. Still operational today around the clock all year, the PCC can provide back up to TBNC and vice versa in case one of the centres becomes inoperative through fire or some other disastrous event. The robust network set-up will allow operations to be completely transferred from one centre to another for maintaining uninterrupted safety of navigation.

The Port Control Centre also features training facilities for training people who wish to become VTS operators and supervisors while also providing refresher courses to existing VTS professionals. The two-week VTS training course and three-day refresher is delivered by VTS managers who have years of experience gained on the job. The courses are accredited by IALA and MCA. 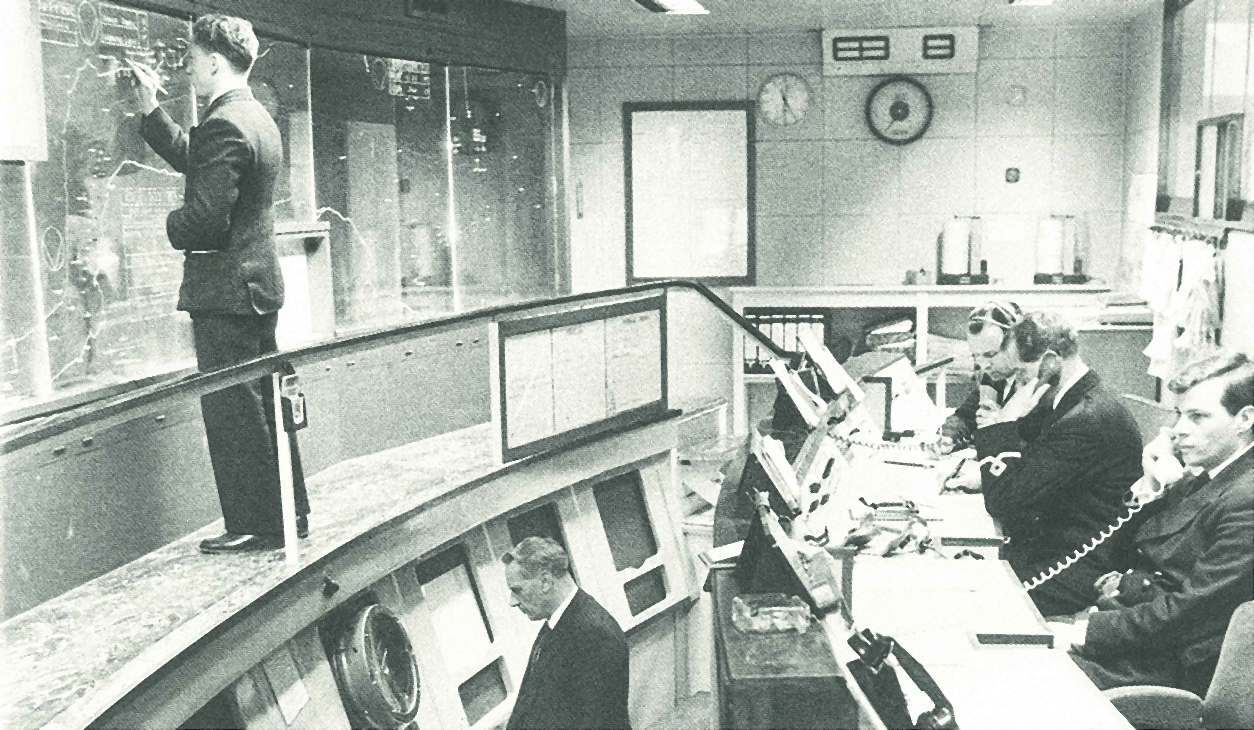 The relationship and protocols between Port of London Authority TBNC and the Thames Barrier are set-out in the Thames Barriers and Flood Prevention Act 1972 and the Port of London Act 1968. These Acts define the role of the Thames Barrier itself as a flood defence and TBNC’s responsibilities regulating navigation of vessels through it. For full or partial Barrier closures  TBNC co-ordinates the passage of the final vessels through the Barrier and works with PLA patrol launches, one upstream, one downstream of the Barrier who intercept any vessels navigating without VHF radio that might be unaware of the closure.

A long-serving London VTS Officer recounts from memory the period when the Thames Barrier was in construction.

“The control for the Barrier was run by a marine officer sited in a portable building on top of the building where the present TBNC is,” he recalls. There was also a control centre at Thames House, in Gallions Reach, responsible for safety of navigation from Crayfordness to Teddington.


“The vessels would switch from Gallions Radio, channel 14, to Barrier Control, channel 18, between Margaretness and Blackwall Point. 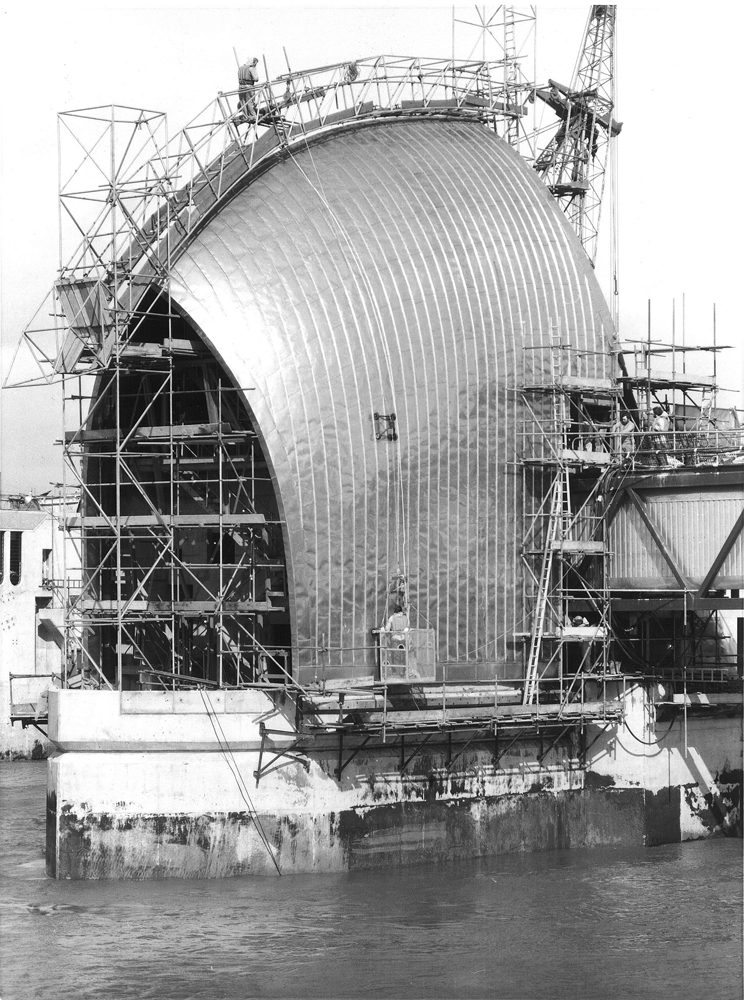 “On completion of the present operations room, the radio officers from Thames House were transferred to TBNC. The duty officer at Thames House remained there as dockmaster as The Royal and West India Docks were still operational.

“At first, the Barrier controller would continue to take control of shipping in the Barrier Control Zone (BCZ). Over the years this became more relaxed and the radio officer (later to be VTS officers) would do the radio work for the whole area.

“During the building of the Barrier the shipping used what was termed the Northern Diversionary Channel (NDC). This channel was one-way working with preference obviously give to vessels with the tide.

“There were a lot more working berths above the Barrier at this time and the West India Docks still had large vessels so timing was at times challenging. P&O were also running a Jetfoil service from Tower Pier to Zeebrugge on a four-hour trip. If they couldn't fly through the Barrier this would cause problems to their schedule so they had priority whenever possible.

“We had the use of a ship tug which was moored up to a buoy just below the Barrier 24 hours a day and could be used to assist any vessels struggling against the tide.

“After all the Barrier piers were constructed, we still continued one span working for some time while works were being carried out.”