Our website uses cookies so that we can provide a better service. Continue to use the site as normal if you're happy with this, or find out how to manage cookies.
X
You are here
> Port Trade
> Part of daily life 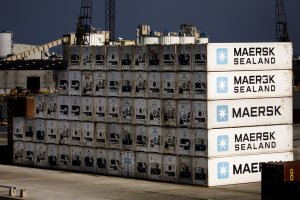 How many people realistically give the Port of London a thought when they wake up in their nice warm house and enjoy a hot shower and a reviving cup of tea, possibly with sugar in?

Do they think of quaysides and cranes as they munch on cereal, toast and butter while reading the newspaper? Do they consider tankers and pipelines as they set out in their car and drive to work via the petrol station?

Probably not. But if they did ask the questions . . .

. . . the common thread through all of the answers would be: the Port of London. 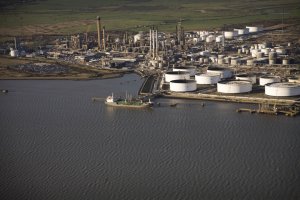 A huge variety of products are shipped into the Port of London from destinations all over the world, and without them, life for millions of people would be very different indeed.

Vopak specialises in the storage and handling of petroleum products and also offers fuel blending at its Thames site.

And a wide variety of other liquid bulks and chemicals are imported and blended at facilities such as TDG’s Dagenham plant, Nustar and Oikos Storage’s Canvey Island site, which handles aviation fuel, petroleum products and chemicals. TDG also handles hard and soft vegetable and edible oils, for food production.

At Purfleet, Pura Foods imports about 300,000 tonnes of edible oils a year, including sunflower, rapeseed, palm and coconut – serving Unilever’s margarine factory immediately next door and a wide range of food manufacturing factories in the UK and overseas.

And so to that newspaper – or office paper, or letter, or birthday card. London is the UK’s largest hub for the import of newsprint and other reeled papers, as well as board, pulp, plywood, timber and other forest products used in furniture, building and other sectors. Forest products make their way into London’s specialist terminals via both deepsea and shortsea services.

Cars, too, are a major business in London – Hyundai, which has seen UK sales rocket in recent years, has a dedicated operation at the Port of Tilbury. Other marques arrive into the port via shortsea ro-ro services operated by Cobelfret, while most of the 1.2 million diesel engines manufactured each year at Ford’s Dagenham Engine Plant are shipped to vehicle assembly plants throughout Europe.

And parallel to the many finished products handled by the port are the raw and semi-finished products that are essential to major construction projects and to everyday life – aggregates and steel, including coil, rebar and structural steel, which are imported through a large number of 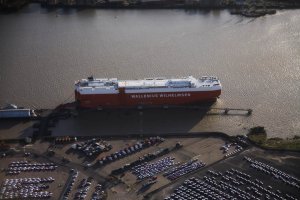 specialist terminals on the Thames.

Of course, many of London’s imports arrive in unitised form – via shortsea or deepsea containerlines, or by roll-on/roll-off services into terminals such as CdMR Purfleet or facilities served by P&O, Grimaldi, Transfennica and DFDS. From nappies to table tennis bats – you name it and it’s probably been in a box or trailer arriving into the Port of London.

Many of the major supermarket chains have huge warehousing and distribution centres close to the Thames, once again underlining London’s critical position at the hub of so many supply chains.

A figure often quoted is that 95% of the UK’s imports arrive by sea. It’s good to remember that a great deal of them arrive via the Thames.

The business of food

Food is big business on the Thames serving north/south deepsea trades, in particular in frozen and refrigerated cargoes. Australian and New Zealand meat has been shipped into London for well over 100 years, as consignments of refrigerated foodstuffs – including meat, butter, cheese and fruit.

Tilbury Grain Terminal, meanwhile, is one of the largest grain facilities in the UK, handling wheat, barley, peas, beans and rapeseed exports, and wheat, maize and soya bean imports. It is accredited to handle wheat products by the Organic Food Federation and has drying and blending facilities and other processing options.

Another important food facility is the Tate & Lyle Sugars Thames Refinery at Silvertown, one of the largest cane sugar refineries in the world. The refinery processes 160 tonnes of raw sugar an hour and its annual output is about 1 million tonnes. Raw sugar is imported from a variety of African, Caribbean and Pacific Least Developed Countries (LDC) and Most Favoured Nations (MFN) and from world market suppliers such as Brazil. The refined sugar is transported directly to domestic retail and industrial buyers or exported by ship to customers all over the world.